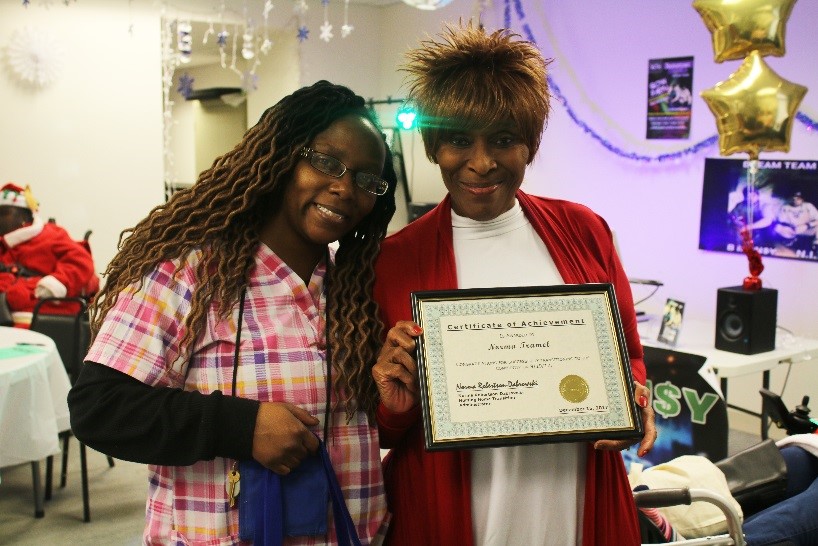 Norma transitioned out of the nursing home on September 19, 2017. She was first admitted 4 years ago for a ruptured hernia that put her in a coma. Once she regained health, she truly yearned for her own home and felt very isolated. Norma decided to put everything in God’s hands, and believes that He led her to Liberty Resources and the NHT team. Now, she is happily living back in her home in the community, with her daughter as one of her Attendants. Her ultimate goal is to become a drug and alcohol counselor. 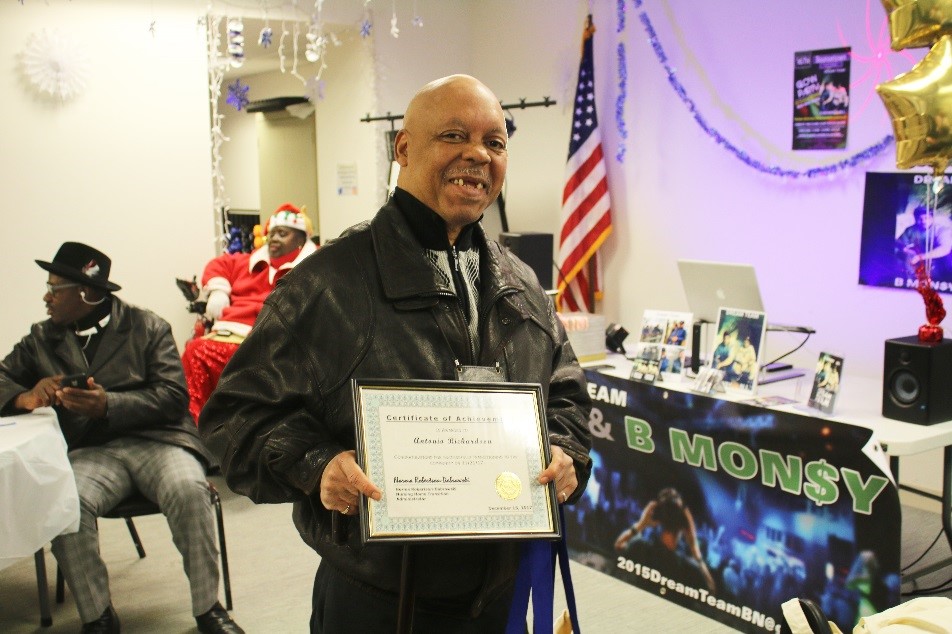 Antonio transitioned out of the nursing home on November 29, 2017. He had several health ailments, such as life-threatening seizures, that caused him to be placed in a nursing home several years ago. He was very unhappy and wished to live in his own home in the community again. He will be forever grateful for Liberty Resources and the NHT team. Antonio is now living back in his apartment with his brother as his Attendant. They plan on getting a bigger apartment in the future so there is more space for them to live comfortably.

On February 2015, Richard was admitted to the nursing home to receive care for his diabetes. Because of his disability, he was not able to move back to his previous home. In June 2015, Richard contacted LRI inquiring about Nursing Home Transition services. He requested LRI assistance with finding an accessible apartment for himself and his elderly father. In July 2016, after obtaining the required documentation for housing and being approved for Social Security benefits, LRI staff begin to assist Richard and his father with identifying an accessible apartment. He was able to obtain a housing voucher and approved to move into a new 2-bedroom accessible unit. He then made the decision to turn in his voucher and accept the new 2-bedroom unit. In November 2016, Richard transitioned to his new apartment with his elderly father. His father is currently working as his attendant.

RD was born with cerebral palsy and had been living in a nursing home for many years. RD had never lived on her own, but in May 2010, RD contacted Liberty Resources inquiring about transitioning to the community at the age of 39. She wanted to transition into the community with her fiancé, but struggled with the confidence to stand up to the nursing home staff and her family who didn’t support her decision, who lived outside the Greater Philadelphia area. By August of 2015, she was ready to transition independently without her fiancé or her family’s support. Liberty Resources’ Nursing Home Transition team and community advocates supported her and assisted in finding an apartment by December of 2015. In March 2016, RD transitioned to her own apartment. RD’s family began to support her once they saw that she was determined to make her own decisions and could live independently with community based services.

Tracy had been living in an inaccessible one bedroom unit on the third floor. He was admitted into the Philadelphia Nursing Home for his diabetes, which made it difficult for him to walk up and down the stairs of his apartment building. In February 2016, he contacted Liberty Resources and another organization to get funding assistance with paying outstanding bills from his old apartment. Although LRI could not assist with paying his outstanding bills, LRI did assist with finding affordable and accessible housing. In July 2016, he was able to transition back into the community. Tracy strives to help other Consumers who faced the same barriers that he did. He is currently on the list to become an official Community Advocate here at Liberty Resources!

Robin is the mother of three children. Her disability is a spinal cord injury as the result of a gunshot wound. When asked what independent living means to her, Robin said, “I want control over my own life. After my injury, I was in a nursing home for three years. I decided I wasn’t institution material.” Her biggest fear about living independently prior to leaving the nursing home was that she would be left alone without needed Attendant Care Services. Gradually, after having lived in the community, she learned that she could manage alone for periods of time. In fact, Robin’s biggest surprise about living independently was that managing her Attendant Care Services was easier than she thought it would be. Robin received Attendant Care Services from Liberty Resources, as well as: skills training, equipment evaluation, housing information, and support in applying for a Section 8 certificate. Robin notes that there is one thing that she wishes the rest of the community would understand about people with disabilities. “We are people; we deserve the same rights. We should not be looked down upon.” Robin feels that there are still some big issues still facing the disability community. Among them are housing (particularly accessible housing for families with children) and transportation. She strongly believes that Liberty Resources must continue to be a presence in nursing homes, providing people with information about their Independent Living options.

Jean is a former resident of Pennhurst, who has also lived in several Community Living Arrangements (CLAs). What made her choose to live independently? “I can do what I want. I answer to no one but me. I also felt that I was ready to have more responsibility.” Her biggest concern about living independently was that service providers would intrude and start making her decisions for her. “I found out that I could handle it; keep my own apartment, do my own finances, everything. Everything I’ve wanted, I’ve done.” Jean works as a Community Advocate at Liberty Resources. She visits persons living in nursing homes. Jean has also been involved in LRI’s other advocacy efforts. Most recently, she prepared testimony against an effort aimed at keeping institutions for persons with mental disabilities open. Jean feels strongly that all institutions should be closed. She dreams one day of publishing a book about her experiences. Jean feels that the most critical issues facing the disability community are housing and health care. “Persons with disabilities should have more say. We are not outsiders.” Jean feels that Liberty Resources’ role in the community is most critical when a person first decides to move from an institution. “People need services to get on track, where they need to be.”

Manny was born with Spina Bifida. As a young adult, he spent a great deal of time in the hospital. Eventually, his family stopped coming to visit, and he realized he was on his own.  Manny likes living independently because “I choose what I eat. I make my own decisions, my schedule. I wanted to do it a long time ago, but I finally started living independently 14 years ago.” Manny’s biggest concerns about living independently were cooking and the availability of Attendant Care Services. Manny says, “ I was surprised I could do it, that I could pay my bills and be independent.” Liberty Resources provides Manny with Attendant Care Services. He also attended skills training and had some assistance with applying for housing. “Liberty Resources taught me a lot.” Manny is an advocate who participates in Americans with Disabilities for Attendant Programs Today (ADAPT). He believes accessible transportation is the biggest issue still facing the community.

Karen, who has Cerebral Palsy, is married and has three children. She has been living on her own since 1991. Liberty Resources assisted Karen with her transition from a nursing home, where she lived for five years. Prior to living in the nursing home, Karen lived at school. She feels that this experience prepared her for living independently. Since her transition from the nursing home, Karen deals with “general, everyday concerns”. Finances are always a concern. Karen received transitioning services from Liberty Resources, and is currently receiving Attendant Care Services. She has a message for others considering the transition from a nursing home: “Don’t be scared to do it. Liberty Resources’ role is to educate and assist people who know nothing about independent living.” Karen is an activist. She is a member of ADAPT and coordinates Consumer Connection at LRI. She is currently most concerned about the passage of the Community Choice Act.